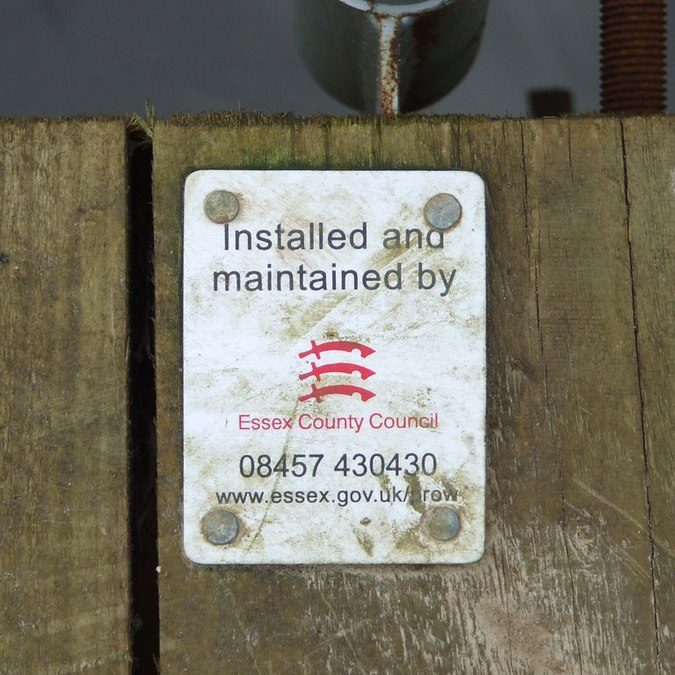 I recently came across a question that’s been bouncing around in my head ever since: “What does it take to maintain that?”

It’s a good question to ask about anything you come across, from a building or a bridge or a website to a process or a cultural norm or a high level of fitness. It’s particularly important to ask it about anything YOU are going to make, initiate, or otherwise launch.

While innovation tends to focus on making new stuff (i.e. the Novelty piece of our innovation definition), if we’re going to have real impact over the long term, we’ve got to pay attention to maintenance. We’ve got to plan for it. Thus, the question.

And for those with a strong appetite for novelty, the good news is that maintenance has an element of newness in it as well. As the British writer G.K. Chesterton put it: If you leave a white post alone it will soon be a black post. If you particularly want it to be white you must be always painting it again; that is, you must be always having a revolution. Briefly, if you want the old white post you must have a new white post.

So… I encourage you to keep this question in mind as you go about doing innovation-y stuff, making and fielding & offering new products & services. I also encourage you to find the revolution in maintenance, as you turn the old white post into the new white post. 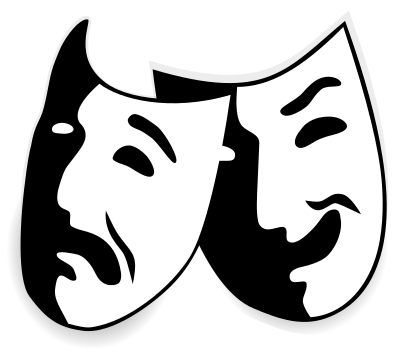 Can we talk about feedback for a moment?

When you make something and share it with the world (an activity I highly recommend!), you’re creating a situation where people might express an opinion about what you created and shared. That’s kinda the goal and often is pretty great. Personally, I think it’s a real bummer when my creative efforts are ignored or met with silence.

But… let’s also note that getting feedback isn’t always giggles and rainbows either. Recently, I got two very different responses to my work – interestingly, these came in on the exact same day.

First, a friend sent me a link to a snarky, sarcastic video they’d found that was VERY critical of me and my work (and, for some reason, criticized my smile?). The video narrator did not show their face or their name (or their smile!), but they sure spent a lot of time showing my smiling face and saying my name. He got lots of things wrong in the video – for example he said I never worked as an engineer and was never in the military, although I in fact spent 20 years in uniform… as an engineer. Ironically, at one point he claimed to agree with me… on something my book does not say (in fact, it says the opposite). With so many facts wrong, he’s not exactly a critic I’m going to take personally or seriously, and his commentary clearly falls into the category of trolling rather than constructive criticism.

Later that very same day, I received a lovely, thoughtful review by someone who actually read my first book and thoroughly enjoyed it. She asked permission to send me a review she’d written – yes, I would be delighted to read your positive review of my work – and of course she signed her name to the request. It’s not often I get such an enthusiastic response to my work, and her review was a delicious antidote to the toxic spew from the earlier video.

I’m not sure what you’ll take away from this story, but it got me thinking about several things.

First, making work public is a social act, and I genuinely want people to respond to my work. I want to hear their responses and reactions.

Second, people can respond in very different ways to the same work… sometimes even on the same day!

And third, some responses are more valid than others. Yup, I liked the written review more, because it was positive and kind. But that review is also more credible, because she had clearly read the book, she got the facts right and offered direct quotes. Plus, she signed her name to the piece. I generally find anonymous opinions less credible than opinions accompanied by the person’s name.

So… when you share your work with the world (and I hope you do), prepare for people to respond to it (and I hope they do). Don’t let the haters drag you down and don’t let the positive reviews go to your head. In either case, don’t pay too much attention to anonymous comments, reviews that get the facts demonstrably incorrect, or gratuitous criticisms of your smile (I promise, your smile is lovely!). When you’re the one crafting a response of some type, sign your name if you want to be taken seriously. And of course, please be kind. 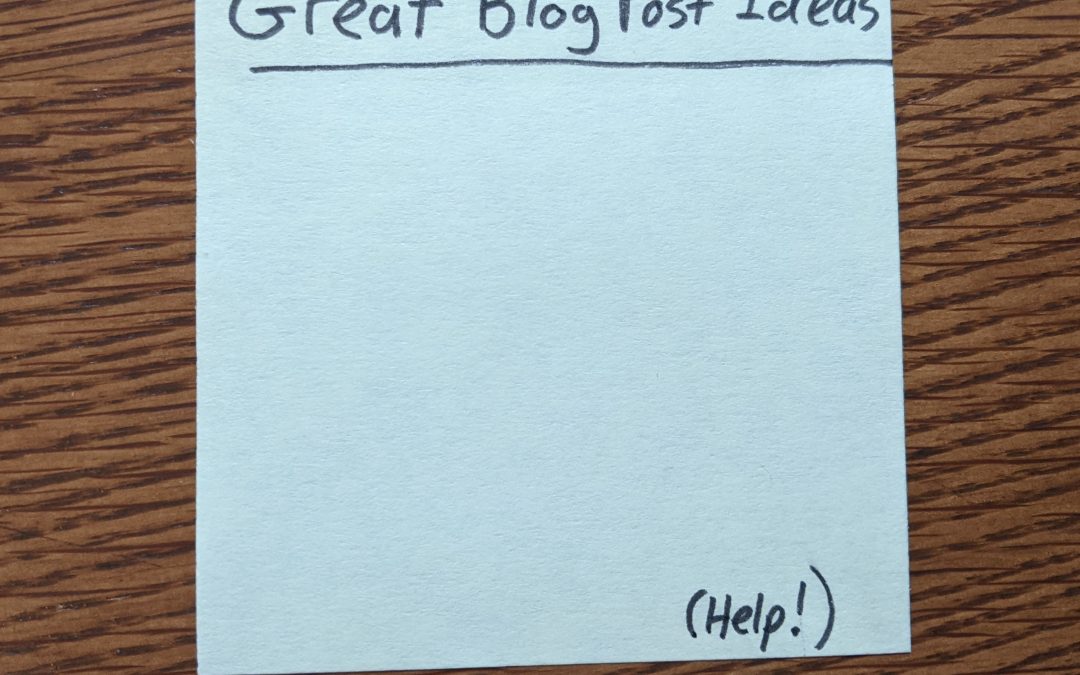 Last week’s post was about how to make videos. So I figured this week I’d let you in on my secret technique for writing blog posts!

It’s pretty simple, actually. I open my Outlook calendar, find an open 30-minute slot, and create an appointment with myself titled “Write a blog post.”

When the appointed time arrives, I briefly panic because I have no ideas whatsoever. This is apparently an essential part of the process, because I hardly ever skip it.

Then I take a deep breath and think about things I’ve done, read, heard, or thought during the past week. Is there a question I’ve been pondering, a book or article I enjoyed, an experiment I can report on, a thing I’ve made that I can share, or an experience I can recount? If the answer to all those questions is “Nope,” then I take a moment to regret my life choices and make a point to do better next week.

But most weeks there’s something I’ve read, wondered, created, or lived through which can serve as fodder for a blog post. So I get some paper and my favorite green pen, then start laying down an utterly unpublishable stream-of-consciousness jumble. I notice how much time is left in my 30-minute appointment (not much!!). And then I rework that jumbled-up mess into something resembling a point, a question, a recommendation, or an observation. This generally involves crossing out big chunks of text to uncover the one idea, phrase, or concept that might be worth sharing.

When the time is up, I press the appropriate button that schedules the post to be published… and I block another 30 minutes on my calendar for next week.

The “How To Make A Video” Video

Several years ago, a really smart buddy of mine suggested we are moving into a “post-text” world. He made a pretty compelling case that the rise of emojis, memes, videos, and other graphic-based communication products represented a fundamental shift in how humans communicate with each other.

Of course, text hasn’t exactly gone away yet (you are reading this blog post, for example), so “post-text” might be a bit of a misnomer. Still, I think he was on to something. In earlier eras we all used text for 90% of our communications (letters, memos, emails, reports, etc), with an occasional sketch or graph thrown in. But today our communication options are not limited to text on a page. Text as a medium isn’t gone entirely, but it’s also not the only game in town, and in many cases, it’s no longer the default mode.

Which brings me to this little explainer video I made. It’s about two and a half minutes long, and it shows you how to record a video using PowerPoint. Not to get too meta, but it’s a non-text-based message about how to make non-text-based messages. I hope you find it helpful and I’d love to see what videos you might make! 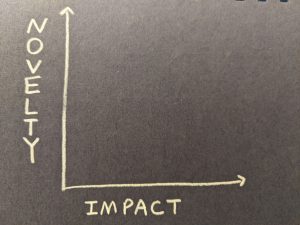 Here at ITK, we define innovation as “novelty with impact.” Just last week, it occurred to me to turn that definition into a graph, with Novelty along one axis and Impact along the other (seriously, how did I not think of this sooner?). At the low end of the Novelty axis, we find things that are Kinda Familiar, while at the high end things are Utterly Unique. Similarly, things at the low end of the Impact axis are Kinda Helpful, while the high end is full of products and services that SAVE THE WORLD.

So, the lower left quadrant might be minor innovations, things that are both kinda familiar and kinda helpful. The upper right quadrant is mega innovations. Both quadrants are innovative, just to different degrees. So far, so good, right? 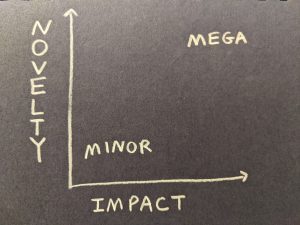 OK, the really interesting thing isn’t in either of those quadrants. Instead, it’s this arrow that points down and to the right. I call it the Innovation Maturity Slope, and it shows what happens when an innovative product or service becomes… popular (so maybe we should call it the popularity slope?). 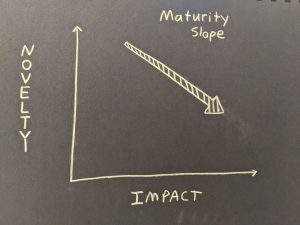 Here’s what’s happening along this slope: popularity leads to familiarity, which reduces novelty. People see the thing and respond “Oh yeah, I’ve heard of that.” But popularity also means more people benefit from the thing, which means impact increases.

The net result: popularity moves us down and to the right.

Think of what happens to an iPod, a cool new app, or the latest software development method. At first, a small number of early adopters use the thing, so it is relatively uncommon (high-N) and its impact is constrained to a relatively small group (low-I). It sits in the upper left quadrant. But later, everyone gets an iPod, discovers the app, or adopts Agile software methods. As more people use the thing and benefit from it, it becomes less novel but more impactful.

The reason I’m sharing this is to point out: this change can feel like a loss to the person behind the innovation. It might even feel like a failure, as if they “aren’t innovative anymore,” because their creation is less novel than it was before. It’s  super easy to mistake a drop in novelty for a lack of innovation, even when impact is increasing. But the thing to remember is that novelty is not the point. For that matter, innovation isn’t the point either. Impact is the point – doing something that matters, solving a problem, creating value, helping people, making things better.

So if you are fortunate enough to see your project move to the right along the Impact axis, remember to count that as a sign of maturity and progress. It’s definitely a win.