What if the Tortoise and the Hare Did a “Rose Bud Thorn”? 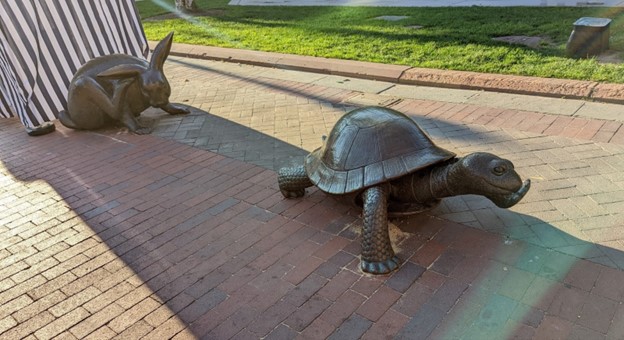 As the fable goes, the Tortoise and the Hare competed in a race—which culminated in the Tortoise winning and the (well-rested) Hare bemoaning an unexpected loss.  Aesop’s narration may stop there, but the story itself doesn’t need to end.  Viewed through the lens of the Innovation Toolkit, the Tortoise and the Hare would benefit from performing a retrospective analysis of their race, so they can identify lessons learned for the future.

Indeed, let’s have a little fun (we’re learning from anthropomorphic animals, after all), and say that the Innovation Toolkit was the race’s sponsor and that the Tortoise and the Hare—and the Fox judge—continue in their fabled roles.  What happens next?

The Tortoise and the Hare linger at the finish line of the race, both eyeing the ITK banner fluttering in the wind.  “What’s a Rose Bud Thorn?” asks the Hare distractedly.

“That’s a good question,” says the Tortoise, looking around for help.  “Why don’t we ask our friend, Fox?”

“But… the race,” says the Hare.  “I’m all ready to beat you if we try again!”  However, the Tortoise has already started walking towards the Fox’s den.  The Hare scrambles to catch up. 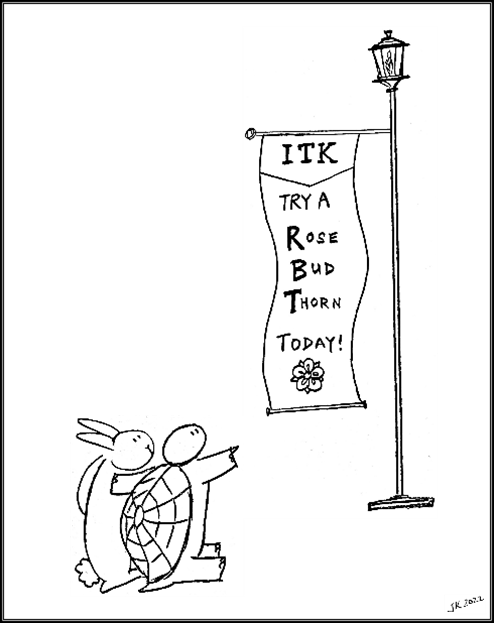 “Fox!” the Tortoise is saying.  “Could you tell us what a Rose Bud Thorn is?”

“Why, yes, Tortoise and Hare,” replies the Fox.  “The RBT is an innovation tool for evaluating an event after it occurs.  A retrospective, in other words.”

“I lost the race,” says the Hare.  “What else could it possibly tell us?”

The Fox gives the question fair consideration.  “Well, losing the race would be a negative, or “Thorn”—for you, at least.  A “Rose” is something positive, such as getting good exercise, and a “Bud” is an opportunity or a potential, such as trying a different strategy next time.  Also, those are just examples from your perspective, not Tortoise’s.”

The Hare looks intrigued, and the Tortoise slowly nods, so the Fox supplies them with pens and colored sticky notes to construct a simple Rose Bud Thorn on the grass.  The Hare’s writing is scribbled, whereas the Tortoise’s is quite neat.  Once they finish jotting down ideas, the Fox moderates a discussion between them, starting with the Roses, then the Thorns, and then the Buds.  At the Fox’s suggestion, they conclude the session by placing small leaves on the sticky notes that resonated with them the most.

Feeling inspired, the Tortoise and the Hare thank the Fox and head out across the forest.  The Tortoise, never one to back down from a challenge, suggests doing a marathon together, and the Hare, with newly acquired humility, agrees.  From behind them, the Fox calls out, “Have you heard of the Premortem tool?  It helps you define success, and it’s often used after the RBT.  You could try to use it before the marathon!”

The Tortoise and the Hare wave at the Fox in a friendly way, but they are too deep in their discussion to turn around now.  The Fox shrugs and settles down on the grass for a well-deserved nap.  Eyes closing, the Fox reflects on the eventful day before murmuring wryly into the forest air:

“There’s always more to learn, isn’t there?  Sooner or later, they’ll be back…”