Four Takeaways from a Creative Project 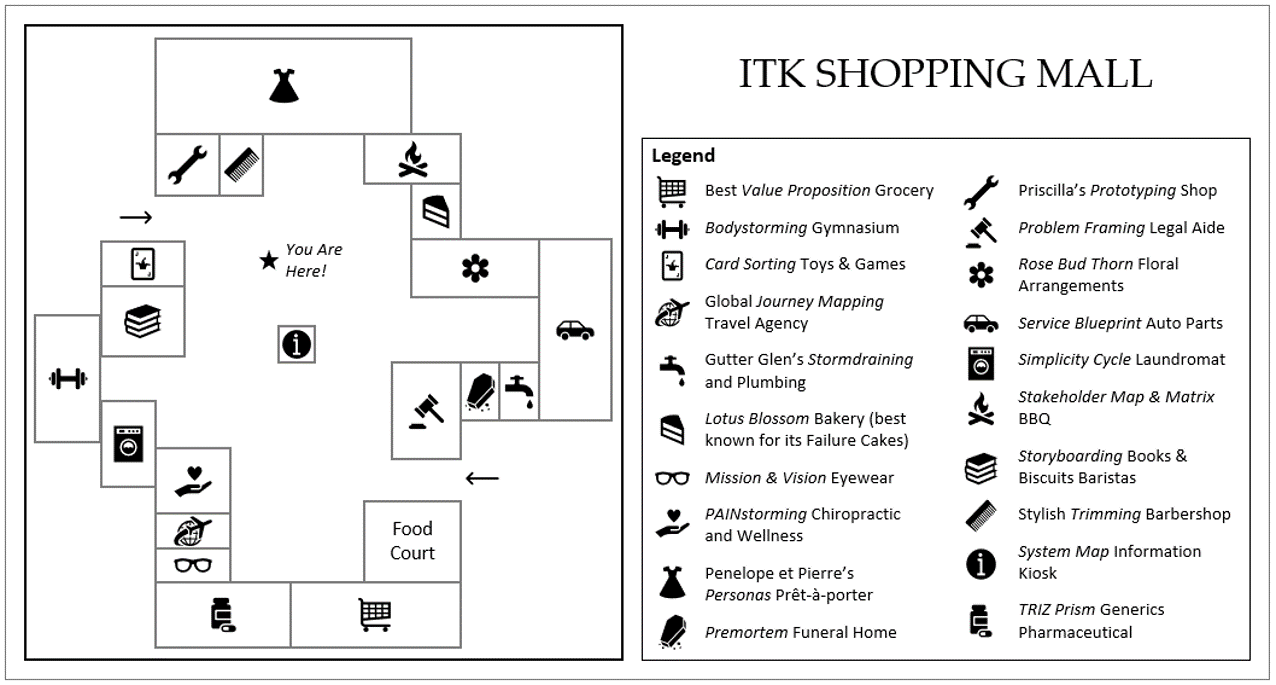 A few weeks ago, on my own time, I dove into a short-term creative project.

I was inspired by Karim Thompson on the Innovation Toolkit team: he invented a list of fictional strip mall business names based on some of the ITK tools.  Functionally, the list helped you remember the tool names, but its intangible benefits went well beyond that.  I remember how so many of us on the team were not only entertained but also energized by what he created.  At some point, I concluded—this can’t be forgotten in the annals of team history!

Adapting Karim’s list into a more visual format seemed like a natural next step.  I expanded the original list by adding a few business names of my own, and then I formed a map legend and designed a map layout.  Several versions later, the final “ITK Shopping Mall Map” was born!  It was quite an iterative process, and looking back, I asked myself:

What takeaways do I want to share as a result of this experience?

From the start, I planned to include this shopping mall map in our ITK Handbook, which is an ITK how-to guide and an informal sequel to our choose-your-own-adventure-style book The Toolbox of Innovation.  Since I made line drawings by hand for our first book to resemble the CYOA books of the 80’s and 90’s, I originally planned to draw the map by hand as well.  However, I realized that the non-CYOA style of the ITK Handbook opened up other possibilities.  In fact, only after letting go of the “It’s always been done this way before!” argument did it become clear to me that electronically creating the map was the better option to begin with.

I decided to keep it simple by using PowerPoint as my creation software.  As I developed the map, I got into the habit of duplicating my in-progress version and then working off of the newer copy, which resulted in dozens of sequential PowerPoint slides.  Although this was a basic technique (thank you, copy and paste!), it made all the difference.  It allowed me to incrementally move forward with new ideas in the design process—and if I liked an old idea better, I could always find my way back.  To illustrate this, see the provided figure with four map versions at different points in the brainstorming process.  Some versions were considerably better than others!

Given the nature of this side project, no one would have been upset if I didn’t finish it.  In many ways, this was incredibly freeing.  I was self-motivated to see my vision come to fruition, but I took my time looking into common shopping mall layouts and actually discovered one of my best design ideas after a leisurely session of experimentation.  Even for projects with fixed deadlines, starting early to give yourself flexibility can be invaluable.  Yes, sometimes constraints are useful, but other times the feeling of not being rushed can be exactly what you need to achieve results.

A final product that looks simple and effortless usually belies the very effort that you put into it.  What’s more, this is a good thing—it means that your hard work has paid off!  I have experienced this before when using the Premortem and Mission & Vision Tool, and I found this to be true here too after following a winding path to reach the final design of the map.  Blaise Pascal summarized it nicely back in the seventeenth century, when he is said to have penned, “I would have written a shorter letter, but I didn’t have the time.”  We need to more consistently give ourselves the opportunity to go that extra mile—and write that shorter letter.

This side project was fulfilling in that it allowed me to breathe new life into the fictional ITK business names that Karim created.  Not only did I learn valuable lessons from the iterative nature of the map design process, but each time I look back at the completed ITK Shopping Mall Map, I can’t help but grin at everything it represents.

More than anything, I consider that a measure of success if ever there was one. Best of luck on your own creative pursuits!