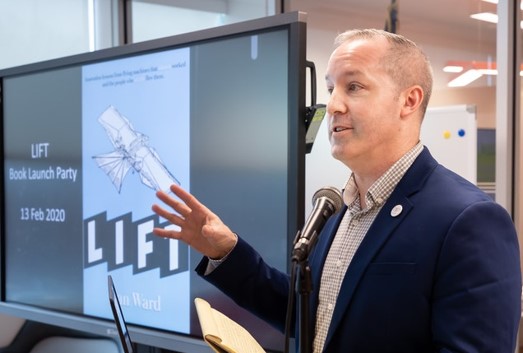 This week’s blog post is an interview with Dan Ward, talking about his new book Lift – Innovation Lessons From Flying Machines That ALMOST Worked and The People Who NEARLY Flew Them. As a special bonus, we’ve got a 14-minute audio version of the interview, which is (mostly) transcribed below

Dan, Lift is your third book. Your first book was titled, FIRE – How Fast, Inexpensive, Restrained, and Elegant Methods Ignite Innovation which explores how excessive investment of time, money, or complexity actually reduces innovation and that the secret to innovation is to be fast, inexpensive, simple, and restrained. Your second book digs deeper into those concepts – specifically the term Elegance. Titled, The Simplicity Cycle – A Field Guide to Making Things Better Without Making Them Worse, you show us that unnecessary complexity adds complications, then provide a number of techniques for identifying the problem and striking the proper balance. What made you want to write this book?
I came across these stories of 19th century flying machines several years ago, and they completely blew my mind. I kinda fell in love with the topic. I couldn’t stop thinking about them, and the more research I did into flying machines from the 1800’s, the more I learned, the more I wanted to share these stories with other people.

In large part that’s because most of us know so little about this era of aviation history. Even among aeronautical engineers, pilots, and Air Force personnel, there’s this weird historical blind spot. People seem to think Orville and Wilbur were the first to try to build an airplane, as if they were starting with a blank sheet of paper. Of course that’s not true. There were hundreds of people doing similar work, particularly in the late 1800’s. Their stories are amazing on their own, but the best part is they are also hugely relevant to the challenges we face today.

In your intro, you talk about the five stars of your book. In a sentence or less, how would you summarize each individual?
Ooh, that’s tough, but here goes! Chapter one is about Octave Chanute, a connector who built a community for aviation experimenters in the late 1800’s at a time when lots of people were experimenting and nobody was succeeding.

Chapter two introduces Otto Lilienthal, who bravely strapped on home-made wings and jumped off cliffs thousands of times, trying to figure out how to make an airplane stable.

Alberto Santos=Dumont is the core of Chapter three, and his persistence and iterative approach to design was a huge inspiration. Also, I want to build my own version of his airship Number 9 someday.

Chapter four is about James Means, who beautifully blended pragmatic realism with a counter-intuitive perspective on gravity, and took an inclusive and invitational posture in his work.

Finally, Octave Chanute wrote a perfect summary of Chapter five’s subject, so I’ll just quote him: “If there be one man, more than another, who deserves to succeed in flying through the air, that man is Mr. Laurence Hargrave…” That pretty much says it all.

Do you have a favorite story that you came across in your research for the book – that really resonated or inspired you?
There’s a story I adore but that didn’t include because I couldn’t quite make it fit into the book, so I’ll share it here. It’s about a guy named Moulillard who strapped on some homemade wings, jumped over a drainage ditch, and was absolutely terrified when he found himself gliding along a foot off the ground, unable to steer or land. He estimated his speed was between 8 and 11 miles per hour, which put him somewhere between the top speed of a house mouse and an alligator (yes, I looked that up).

Mouillard’s flight was scary because he was out in the back forty of his farm, and he knew that if he crashed and got injured, it would be a long time before anyone found him. Fortunately he came back to earth safely – again, he was literally one foot off the ground, traveling at the speed of a mouse – and the coolest part is that after he landed he immediately measured the distance he’d flown. What an engineer!

I love that he was so scared (the phrase he used was “oh, the horror!”), and I love that the first thing he did after landing was measure the distance he’d covered. I hope I would do the same thing in that situation. But what’s really important about the story is that before jumping, he clearly had not anticipated what to do if his wings worked. His design was focused on producing lift, with absolutely zero mechanism for control. There’s probably a lesson in there too.

Lift is more than just stories about some men – and women – who built flying machines, but also practical insights about innovation. What do you want or hope readers take away from your book?
I think the main lesson is on page five: “failure is never the whole story, nor the end of the story.” Of course, I hope people will read the rest of the book too, but if you only read up to page five, you’ll at least have something useful to take away.

The other big point is the importance of diversity, inclusion, and collaboration. There’s a very clear pattern across all these experiments, and all the modern stories in the book as well, about the relationship between diversity and innovation. I lay it out in Chapter three, writing “…the people who made the most progress were the collaborators and bridge builders, the includers and inviters, the broad-minded generalists and discipline blenders. The people who had the hardest time were the isolated excluders, the narrow-minded specialists, and the arrogant purists.” If you want to read more about that, download the free excerpt from Chapter 3 at my website.

You talk about “cultivating a specific perspective on failure.” How can we get organizations and individuals to be more comfortable with failure?
I think failure is hard for so many people because it seems final. But when we understand that failure is not the whole story nor the end of the story, when we see failure as a temporary step or as an unavoidable component of progress, when we see failure as the key to learning, it’s really much more palatable. Maybe even fun.

What industries or areas do you see failure being done “well”? And which ones not so well?
When someone dies, a bridge falls down, or an airplane crashes, those communities assemble a large group of doctors, civil engineers, or pilots to investigate what went wrong and prevent it from happening again. That’s one of the instances where studying failure can make a big difference. Medicine in particular does a pretty good job of learning and adapting when things don’t work. In contrast when a software development project goes pear-shaped or a technology development project doesn’t work out, we tend to bury that and act as if it never happened.

Dan, I enjoyed the book immensely. The history of the pursuit of flight was fascinating, your writing made me laugh out loud – always a good thing – and your lessons are useful and inspiring. What’s the best review you’ve gotten on this book so far?
I love that Andy Nulman said LIFT is “ebulliently written” (even though I always mispronounce the word ebullient). I can’t say I was deliberately aiming to write with ebullience, but when I saw that description I felt seen and knew I wanted to put that on the cover.

A few people have said the book sounds like me, it matches the way I am in real life. That makes me very happy, because that’s something I very much was aiming to do. I want my writing to sound genuine, which isn’t always easy, so that’s a really good review as far as I’m concerned.

Any negative reviews?
I haven’t seen any negative reviews yet, but I’m not too worried about those. A negative review basically means that I wrote a book, I finished it, got it published, I took a chance, I sent it out into the world, and someone read it. That feel a lot like success to me – the finishing, the completion. If someone doesn’t like it, well, that person probably wasn’t my audience in the first place.

Okay, we’ve talked about the book, so I’m sure listeners are wondering where they can purchase copies of LIFT?
Not at Amazon, and that’s on purpose. My first two books are available at Amazon, but with this one I’m deliberately aiming to go more local, more of an independent, small business approach. So you can get the paperback at Lulu.com, and the eBook is available at Barnes & Noble or Kobo. The audiobook is in the works, hope to have it done by the spring! 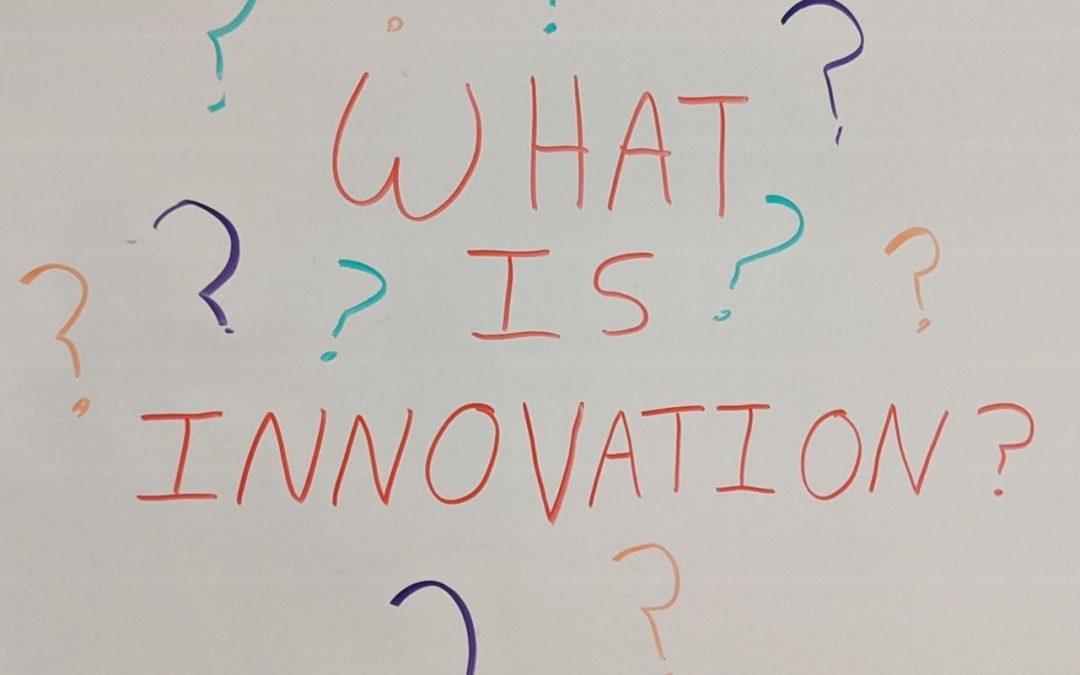 Innovation is one of those words that gets used more often than it gets defined. And these days, it gets used a whole lot. In fact, it’s probably overused. But despite the popularity of the term (or maybe because of it) we run into a lot of confusion about what the word innovate even means.

Let’s clear that up today, shall we?

Team Toolkit uses a pretty simple definition of innovation. It’s just three words: “NOVELTY WITH IMPACT.” We like this definition for several reasons.

First, it’s simple, clear, and short enough to be memorable. That’s important, because a definition people can’t understand or remember isn’t very helpful, is it?

Second, “novelty with impact” is broad enough to be applicable in a wide range of situations. For example, we might talk about novel technologies or novel processes, new organizational structures or new methods of communication. We know novelty comes in a lot of different flavors, so our definition encompasses them rather than trying to list them (e.g. “Innovation is any new process, technology, solution, product, etc…”).

Incidentally, we tend to take a broad, inclusive understanding of the word novelty. The thing doesn’t have to be new to the whole world to count as novel. If it’s new to us, or new to our domain, that counts.

Similarly, the word impact might refer to saving time or saving money, increasing effectiveness or improving efficiency. It might refer to solving a problem, making an improvement, changing the marketplace or revolutionizing the battlespace. Rather than trying to pack our definition with a comprehensive list of all that stuff, we just refer to all forms of positive difference making as “impact.”

Answering those two questions is a great way to get clarity about the sort of innovation we’re trying to introduce to the world.

For example, this blog post is offering a new definition of innovation (Novelty!), to help people better understand what innovation is and to build their innovation strategies (Impact!).