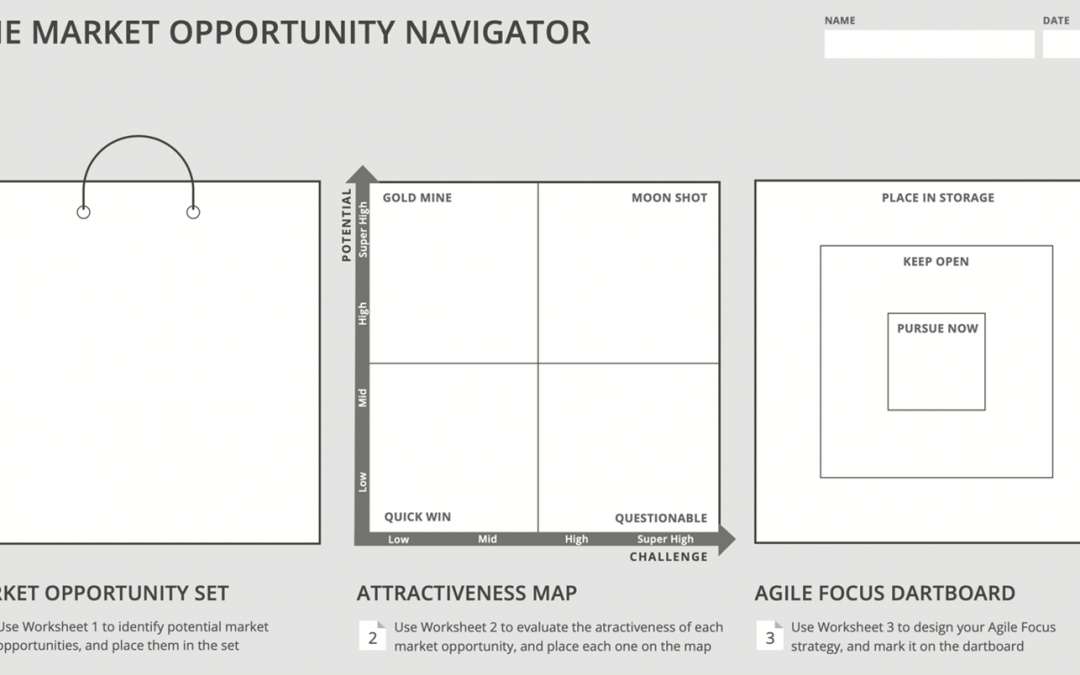 The Market Opportunity Navigator is a set of three tools that help project teams ideate, organize, and strategize their market opportunities. Created by “Where to Play,” it is designed “to help [teams] get a clear overview of [their] potential market domains and make confident decisions on where to play next.”

While “Where to Play” focuses on business strategy goals, these tools can aid discussions on which research topics, proposals, areas of interest, or other ideas the group should pursue.

The “traditional” method as outlined on the Market Opportunity Navigator is only one option to put these tools in practice. I adopted the Agile Focus Dartboard and Attractiveness Map in a slightly different way recently during an ITK session. Regardless of the approach, establishing action items at the end of any session is essential in setting ideas into motion!

In a recent ITK session I facilitated, 3 groups of 3-4 worked together to brainstorm goals for 1, 3-5, and 10 years for a new software wellness initiative that aimed to transform how MITRE approaches “healthy” software development by creating an inclusive community and collection of resources. We used the Agile Focus Dartboard as a visual aid for the groups to note the area of focus they should be brainstorming in.

The year 1 group was the “pursue now” section, and they were tasked with brainstorming initiatives that the team could start on right away. The 3-5 year group was “keep open,” where they came up with ideas that could come into play, or be “launched” several years from now. The 10 year groups was “place in storage,” and they thought of the practices, resources, and culture shifts that they hoped MITRE would lead a decade in the future. While these substitutions aren’t exact matches for the listed categories, they gave context for the groups to work toward.

In the smaller groups, the teams brainstormed for 20 minutes on dry-erase laminate cards (an alternative for sticky notes), and placed their thoughts on an appropriate quadrant in the Attractiveness Map.

We then discussed in turns all three Attractiveness Maps in a larger group to consider and include other’s opinions on where the ideas would fall in the quadrant based on experience. For example, we thought about the lift that research proposals would take in the year 1 timeframe. Originally, we thought this idea would be a quick win, but when discussing with the larger group, we moved this to a gold mine.

Because we were starting a brand new wide-spread initiative that aims to change how engineers at MITRE work, culture change was a big topic that all three groups discussed. When we came together, we agreed that it would fit into something to pursue now, even though we may not see the change for 3-5 or even 10 years.

Year 1 identified this culture shift as a moon shot, and the 3-5 and 10 year as somewhere in the middle of the quadrant. We knew if we didn’t start acting on culture-changing efforts now, this culture shift would delay, so we made action items in “year 1/pursue now” to initiate the kind of practices that will drive the desired long-term changes. For example, the group considered using incentives like small company awards as an immediate “low challenge, medium potential” option to catalyze this culture change.

While the Market Opportunity Navigator was designed for business goals, our Software Wellness Center initiative team was able to tailor and adopt this strategy to our goals of providing the best services for software developers to develop healthy software for all.

If you’d like to give it a try, here’s a quick summary of the steps involved: