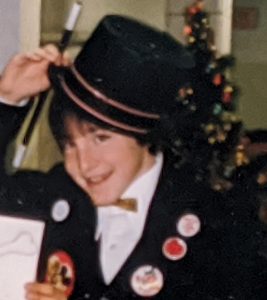 My career as a stage magician began when I was rather young – the photo that accompanies this post is me – The Great Houdani – at age 12, dressed up in my tux and ready to perform one of my first paying gigs at an office Christmas party. All through high school and college I did the birthday party circuit, performed at libraries, hospitals, street festivals, and an occasional breakfast-with-Santa-at-the-mall. I loved being on stage, the money was pretty good, and it was a lot of fun.

I mention all that because sometimes innovation seems like magic. When new technologies or products suddenly appear, when old organizations transform into something new, it’s tempting to come up with mystical explanations. We mistake the inventors, leaders, and change-makers for wizards with access to otherworldly powers, and we speculate about what sort of magic words or gestures they employed to produce such amazing results.

Like stage magic, the reality of innovation is inevitably quite ordinary. Nothing supernatural is actually going on. Instead, we spectators simply did not see what happened behind the curtain and are unaware of all the pre-show setup that made the supposed miracles possible. Sitting in the audience, we fail to notice the hidden slight-of-hand maneuvers. We have no idea how many months of patient practice were necessary to make the performance appear effortless and natural.

Yes, innovative people genuinely do things differently than their status-quo-oriented counterparts. However, neither magicians nor innovators are suspending the laws of physics, nor are they literally doing the impossible. They’re just doing something different. And that’s good news, because it means we can all follow their example and bring a little magic and innovation to our work.

It turns out good innovators and good magicians have a lot in common. For starters, both groups emphasize creativity and imagination. They put in the effort to develop their creativity and bring imagination to bear on their craft. One way we can develop our own creativity is to ask good questions.

When David Copperfield made the Statue of Liberty disappear in 1983, he did not begin with the solution in mind. Instead, he started by asking himself what sort of illusion could not be done. He knew full well that performers make small things disappear inside theaters all the time, but making a national monument disappear in an outdoors setting would be truly impossible. Now that he had an idea of a trick that could not be done, he began the work of figuring out how to do it.

Next, magic and innovation both require a dedication to learning. Practitioners of both arts need to read a lot and spend time with mentors, coaches, and collaborators who can teach them new tricks. As a kid, I read dozens of books about magic and performing. I joined the Society of American Magicians and read their magazine cover-to-cover every month. I was fortunate to find a mentor in Roger Way, aka Skipper The Clown, whose coaching about magic and showmanship made a huge difference in my shows.

As we study, it’s important to make sure our learning includes practical skills as well as academic information. A magician who knows all the technical terms for slight-of-hand moves but has not physically mastered them is like an innovator who can speak at great length about the difference between disruptive innovation and sustaining innovation, even though they have neither disrupted nor sustained anything. So by all means, read books and listen to TED talks. But then set up a mirror and practice that coin trick over and over until you can even fool yourself.

Next, both disciplines require collaboration and people skills. The best performers and innovators tend to have strong relationships with long-term partners. Think Penn and Teller, or Jobs and Wozniak. Once again, this is something everyone can do. We can all take steps to build a diverse and inclusive network, reaching out to people and putting in the time needed to build strong teams.

Bear in mind that good partnerships go beyond the stage itself and extend into the audience. Plenty of magicians are technically competent but have no stage presence and end up boring or alienating their spectators. Similarly, all too many technologist fail to communicate effectively, which greatly limits the impact of their work.

Finally, magic and innovation both require a willingness to experiment and to take risks. Sometimes the risk is physical, like the time I almost drowned myself on stage doing a water escape (spoiler alert – I escaped and survived). Other times the risk is less severe, like every time I do a card trick and hope the audience doesn’t notice the secret move I’m doing right beneath their nose.

Similarly, every innovator must dedicate time and resources to performing experiments with unpredictable outcomes. The key is to start small and do an incremental series of iterative tests, gaining experience and confidence over time.

It’s been years since I picked up a magic wand, but the lessons I learned as a performer continue to influence my work today. I still read deeply, practice constantly, ask questions, build partnerships, and do experiments. And the good news is, no matter what kind of work you do, these behaviors can help bring a little magic to your day too.