Switching It Up (Part 2)

Our Story From Last Week Continues…

At the end of the first day, the facilitation team met and affinitized the feedback we’d heard, grouping it into topics for the next day. Our intent was to form the participants into persistent teams of 5 or 6 people; these teams would move from topic to topic throughout the day.

We also noted which people had been helpful or disruptive in furthering group cohesion, and strategized how to ameliorate this. One of the VIPs, whose mere presence as a VIP was hampering conversation, solved our problem by recognizing that he should not be present for the second half.

The other critical tactic we used was to intentionally mix up the teams, so that each team had representation from two or more roles. Because folks had naturally sat with their ‘friends’, this was relatively easy to accomplish—we went around the room, table by table, and had everyone count off 1, 2, 3, etc. as their group assignment. This shuffled the groups nicely, resulting in a much more varied mix of people in each. 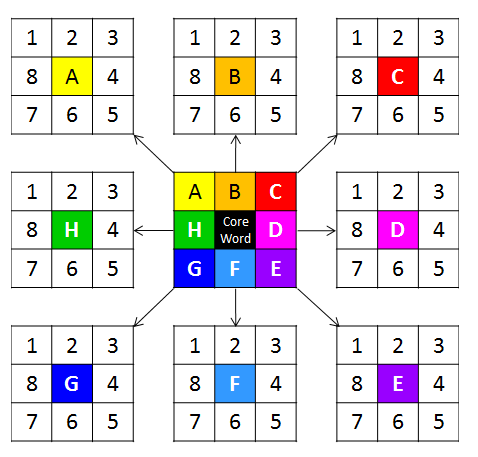 The Lotus Blossom encourages participants to brainstorm subtopics, and then dive into each subtopic to generate related ideas.

To gather ideas for possible actions, we used the Lotus Blossom method. The Lotus Blossom is a structured brainstorming tool that enabled the teams to ideate multiple solutions to the problems identified. Facilitators used “How Might We?” statements to help elicit ideas, shifting the focus from constraints to possibilities.

Using this method, we were able to generate around 40 potential solutions for each topic area in 50 minutes, successfully staying on-task without going too deep into any one topic or rat-hole. Because ideas are immediately written down on the Lotus Blossom worksheet, all participants can see what was brainstormed, and think laterally, rather than getting stuck on a particular topic.

Each table had a MITRE facilitator who helped fill out the diagram. This helped teams understand the context when coming to a new topic. Facilitators also kept the conversation moving, recording and reflected ideas back to the group.

We also wanted the teams to prioritize their ideas. To do this, we used the Impact/Effort Matrix method, sometimes also called the “2×2 matrix” method. (See, e.g. https://www.groupmap.com/map-templates/impact-effort-matrix/ for more details). 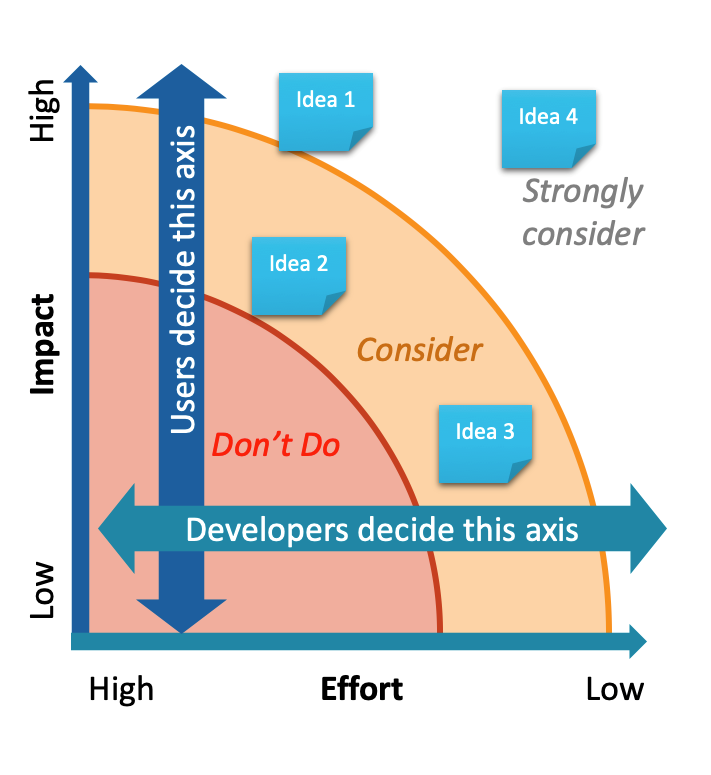 The axes we chose reflected our conflicting populations: impact, which would be specified by end users, and effort, specified by the development teams. The resulting priority was a function of both inputs: high impact/low effort actions would obviously be prioritized above low impact/high effort.

The last piece of our method was to use the clock. We had an abbreviated schedule on the second day: about 4 hours of work time available. We knew we wanted groups to rotate between topics, with later groups building on the work of earlier groups. But by the third or fourth rotations, groups would be coming to a large amount of context; in this situation, brainstorming often begins to dry up and get less productive.

We eventually settled on an accelerating schedule. Groups had 30 minutes to brainstorm and prioritize actions for their first topic; then, 20 minutes on their second, then 10. After each round, groups reported out to the entire room, to help promote coherence, but also to help the participants feel invested in these ideas.

When we noticed they were unengaged or seeming reticent, we asked or volunteered individuals to represent ideas to the group at large. This was extremely helpful; in some cases, people who had been ‘floating along’ and letting the rest of the group do the work ended up pulling out an idea and making it their own. This vastly increases the likelihood of it being actioned in the future. For example, a sysadmin realized that, even though her office had solved lots of process problems, other offices might not have, and that she could share her experience with other offices for an overall improvement.

>After three rotations, all topics had a sufficient number of ideas brainstormed and prioritized, and we stopped and reflected back our key findings to the group as a whole; we then let the group break up into social groups, to continue to build common ground.

The data—captured both as notes and as pictures – became the input for a response document delivered to the sponsor, which was met with strong approval; we were able to reflect the pains and opportunities in the current system, and provide potential actions, all using the words and ideas of the sponsor’s own people.

An equally important outcome was the increase in team cohesiveness across locations and constituencies; folks left with an air of “we can do this together”, which was a desired but not guaranteed outcome. Breaking down silos of knowledge, and teaching developers and users how to communicate, are key means of improving the overall user experience of a system.

The work with the sponsor is currently on hiatus, but we have already been asked to run a similar session with additional sponsor representatives in the future.

Big thanks to guest bloggers Alex Feinman, Tom Seibert and Tammy Freeman for sharing this story!