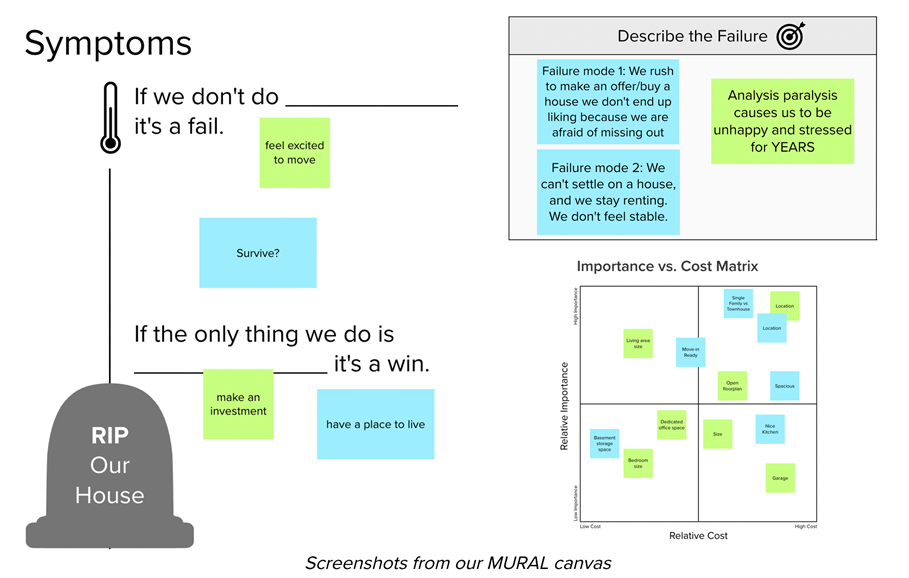 My husband, Ben, and I are at that happy stage of life where we are looking to buy a house together. What started off as a joyful hobby now feels like a full-fledged part-time job full of anxiety, anguish, and frustration. Those of you who have bought a house, especially in a market as hot as Boston is right now, probably know our pain. For the unenlightened, our house buying experience has been akin to proposing marriage to someone after your first blind date – equal parts fear, excitement, and “wow, this could cost me dearly if it goes poorly.”

Since training to become an ITK facilitator, I have found plenty of opportunities to apply ITK tools to my everyday life. After a particularly stressful open house where Ben and I were debating the merits of replacing our home search hobby with a home improvement hobby, we began to worry we would never actually buy a home. Over dinner and some beer, I told Ben I wanted to try out a Premortem with him. His first response was, “Premortem, is that when you kill me before we start?” After a good laugh, I described the tool to him: we’re preemptively trying to understand what failure looks like by describing a particularly bleak future (the bleaker the better), identifying the causes, and coming to a consensus on what success looks like. Sounds easy, right?

I realized after the open house that Ben and I had done a poor job communicating our individual goals because we were too worried about disagreeing. We needed to get everything out on the table. I set us up on different computers in different rooms to use MURAL, an online whiteboarding tool, to fill out a Premortem canvas. I used MURAL’s incognito mode to make sure we didn’t bias each other’s contributions. After 10 minutes of quiet working time, we cozied up on our couch together to discuss our canvas. Right away, we confirmed something we already knew – we were both tracking to the needs, desires, and goals of the other person. However, there were a few things that were surprisingly different.

Our biggest divergence was when answering the most important question on the canvas, “If the only thing we do is ______, it’s a win.” His answer – have a place to live. My answer – make an investment. It was a great dialogue point for some of the stress and anxiety we’d each been feeling. He was worried about the stability of having a house versus being at the will of a landlord. I was concerned that after years of saving up for a down payment we would purchase a house that would go down in value and flush our investment down the drain. Neither of us had vocalized those concerns directly, so it was helpful to talk openly.

We wrapped up the Premortem canvas by describing three failure scenarios and risk mitigations. It was refreshing to go from doom and gloom to planning for future successes. After the Premortem, we took our key house features and plotted them on a Cost x Importance matrix. Just like the Premortem exercise, the differences in our answers led to great conversations about tradeoffs and compromises.

Ben and I found our whiteboarding exercise to be valuable, both because we confirmed that we agree on the important aspects of our house search and because we came to a consensus on what success looks like in the big picture. We used MURAL’s incognito mode to foster clear dialogue without the concern of compromising in the moment or biasing each other’s opinions. In the end, framing of the conversation was just as important as the content.

We haven’t bought a house yet, but we know what we’re looking for… at least a little better than we did before!